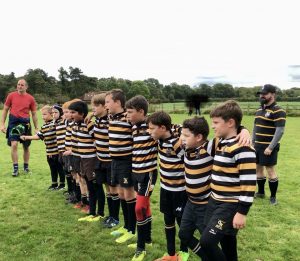 Welcome back everyone, as we all look forward to the 2019-20 season.

The new season means new features of the game for players and parents to get our heads round, particularly the introduction of the uncontested scrum, the Maul and the Ruck. For those with no clue about these things, I thought a brief overview might be helpful.

Still no fending off, and no kicking the ball at this stage either.

The first game of the season saw us travel to Lutterworth, high in confidence and raring to go. Those involved this week were Eddie, Evan, Thomas, Matthew, Ewan, Reuben, Seva, Alfie, Jack and Harry S.

We want to be a team known for up tempo rugby, good handling and passing skills, offloading at the right times as we move forward together both in attack and defence. Though we have a number of pacey, dynamic runners in the team, the coaches have been working on creating a team of much greater depth and clearly want to avoid relying on one or two players running the whole length of the pitch to score our tries.

There was evidence of this in the early stages of the first match, with players running onto the ball on several occasions to really penetrate the Lutterworth defensive line, then passing at the right times to the supporting players. We just about shaded the first half but were caught out on occasion by their direct running and eagerness to win the ball in the ruck.

After a half time team talk that focused on being quicker to contest loose balls; not standing around waiting for someone else to do the work in the ruck; and passing the ball quickly down the line and in the tackle, we started off the second half well by scoring two quick tries. Seva deserves to be singled out for being particularly strong in the ruck, working hard to secure Wyggs possession. After that, things got a little less organised and a scrappy end to the second half saw Lutterworth score two unanswered tries.

The next couple of matches saw more of the same, with some great tries scored whenever we managed to move the ball down the line quickly and accurately. However, there were plenty of occasions where we looked a little less than certain about what to do in the ruck and the Lutterworth players seemed to get the bit between their teeth much quicker than us.

We were caught out on more than one occasion as it seemed that our players were often waiting for someone else to contest for the ball. Clearly some work to do on that area of the game, though again one moment stood out when Jack worked hard to clear out one of the Lutterworth players from the ruck and which resulted in an Oadby try.

More of the same needed from everyone else in the coming weeks please.