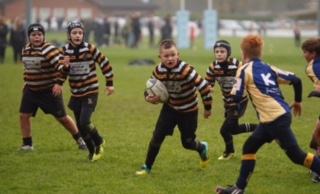 After a couple of weeks of disruption due to the weather the Under 12’s were finally back in action with a return to Oval Park to meet a big physical side from Loughborough. Two large squads, totaling 40 boys on the day, played out 2 close and exciting matches with the spoils being shared with a win a piece.
The home team were slow out of the blocks but finally got into their stride. Sonny Alba and Harry Hine led from the front with strong running displays making hard yards when they were needed. Andrew Uhegwu put in another outstanding tackling display drawing praise from the opposition coaches and all spectators for his bravery and technique. In the backs Jacob Grief showed some great slight of foot on a couple of jinking runs forcing the opposition back, whilst Milo Brotherton returned from a long absence due to injury and looked sharp with some good runs with the ball. In only his second game Akarl Heer demonstrated how hard he’s been working with some fantastic handling under pressure.
Addison Meredith proved too strong for the opposition again crashing over for a number of scores throughout the day ably assisted by Healey Heritage scoring two tries from some powerful running. Healey was making his debut for the team and made an instant impact with good handling and clever pick ups to steel yards when needed. Overall he had an extremely impressive first outing for the team and is a welcome and timely addition to our already strong squad
As usual the team were cheered on by a large home crowd who appreciated the great rugby played by both teams on yet anther enjoyable fixture.