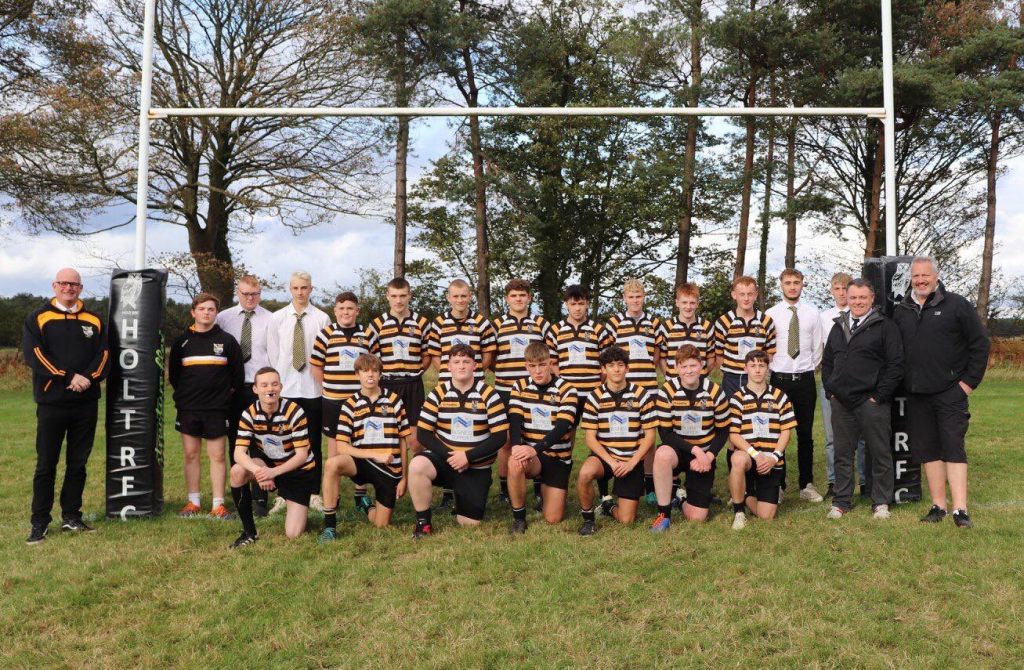 Twenty Wyggs Colts aged 16 to 18 all setting out from Oadby last Friday night for Norfolk on rugby tour, what could possibly go wrong?

Some lads were straining at the leash to get on the tour bus with unnaturally heavy kit bags, others were visibly apprehensive of what lay ahead as they embarked as tour virgins.

After three hours driving and tapping along to the sweet melodic sound of drum & bass a McD’s pit stop, hedge relief and a refreshments restock the lads piled out into digs at Sheringham.

The mayhem carried straight into the digs and then into a previously sleepy Sheringham. Saturday morning, and the England vs Australia kick off and breakfast had clearly arrived too soon for a few.

We arrived at Holt RFC on Saturday in fine fettle. The many hours spent on Friday night rehydrating, playing pool and eating rather than sleeping was clearly excellent prep. The pre match psychological prep also left no stone unturned. Holt’s immaculately turned out blazered lads were visibly shaken to see 15 bleary eyed Wyggs players looking primed as they arrived in sock/slider combos and black gangster bandanas.

The two squads played out an entertaining game. Wyggs had just 15 of their 20 touring lads fit to play. Holt fielded a much larger squad and were excellent opposition. Wyggs started the game strongly and had Holt under pressure for long periods. Despite having good possession and territory Wyggs were unable to finish promising phases of play and conceded three try’s in the first half to be trailing 19-0 at half time. Holt had taken their first half chances from Wyggs mistakes to run the length of the field twice and their strong running by some key players was proving very hard to stop.

Wyggs again started the stronger of the two teams in the second half and continued to apply pressure across the field. A magnificent second half fightback was on when Wyggs skipper Eliot Morris left Holt defenders trailing in his wake to dot down and Ben Mason powered over twice to pull it back to 26-21 to the hosts. Henry Cooke had added the extras. Wyggs pressed and the comeback was nearly complete when a Wyygs pass on the now creaking Holt last ditch defensive line was intercepted and an 80m sprint by a rapid Holt player to score unopposed. The try was decisive and after further Holt squad rotation their extra energy overran the Wyggs in the last 10 minutes. Further long range scores were registered. The final score was 45-21 to our hosts.

The game was played in an great spirit and Holt RFC were again excellent hosts. We very much look forward to hosting their colts at Oval Park soon.

The Saturday night was all about group fish & chips and the obligatory tour court session. His Honour Judge Mason presided and justice was apparently duly served.

Early rise on Sunday again and we fruitlessly joined Nahuel cheering the French rugby team on.

The lads all enjoyed a big Sunday roast at a local golf club, before boarding the buses for the quieter journey home. Drum & bass was exchanged for more soothing music as some eyes closed and heads rocked onto teammates. The returning rugby tourists were home. Some had left Oadby on Friday as apprehensive young individuals, but to a man they returned shoulder to shoulder as a team.

Thanks to everyone who has supported this years tour but particularly Clare Morris for all her arrangements and Mick Corley, Steve Cooke and Les Berg for travelling.

The start of this Wyggs colts season has been tough as we’ve struggled for numbers. Injury and unavailability has hit our small squad hard. To see 20 lads on tour is a huge credit to the group and particularly the lads who’ve joined our group in recent weeks. Some lads are new or returning to rugby and it’s great to see how quickly they’ve become part of the Wyggs Colts group.