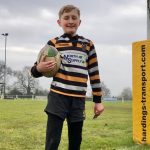 The Under 12’s match against South Leicester on Sunday 24th November marked a landmark for Aedan Dauney-Duignan who made his 100th appearance for the team since record keeping began.
Aedan marked the occasion by being the team captain on the day and scoring a try in a tough encounter. Known for his endless energy, pace and persistence Aedan once again stood up to be counted.
Afterwards Aedan said that rugby was his favourite game because it needs great  teamwork to succeed. He added he enjoyed the game because the physical contact element of the game makes it more interesting and different from  most other sports.
Well done Aedan from all of the U12 coaches, supporters and players!!! 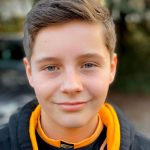 The U12’s took on Lutterworth on Sunday 8th December turning in an impressive performance to share the spoils with a loss and a win.
The match marked the 3rd of our players to make his 100th club appearance with Sonny Alba joining the centurion club this week.
Sonny captained the team on the day and inspired one of our best performances to date in this campaign, leading by example with great tackles, runs and off loads.
Afterwards Sonny said he enjoyed playing rugby because it’s physicality allowed him a way of getting rid of his frustrations or stresses. He added that he loves playing for the Wyggs as he plays in a good team but has a great social aspect each week with his friends too!
Well done Sonny from all of the U12’s Coaches, supporters and playing squad